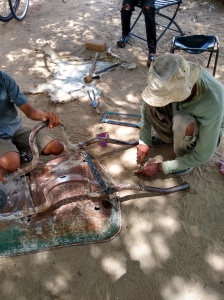 It was a hot Saturday summer afternoon in Tsumkwe.  There I was (Jeremy) visiting my friend and former neighbor Daqm.  We were chillin under the shade tree.  Then Daqm called to one of the kids to bring “the wheelbarrow” over.  I was familiar with this wheelbarrow. In America this hole ridden rusty wheelbarrow would have been taken to the scrapyard 5 years ago, but here it was a precious item to Daqm.  We had fixed it and kept it going 3 years ago when we were neighbors and I was shocked to see it still going.  It was time for another repair.  This one was a major undertaking consider all we had was some sunflower oil to loosen concrete caked bolts and one wrench. After two hours we managed to punch holes in some scrap metal laying around loosen those rusty bolts and nuts and reuse them as there are no hardware stores around.  This is life here in Tsumwke, nothing gets wasted but the most important thing wasn’t the task it was the relationship.  Daqm and I love fixing things together and although it’s been 3 years since we’ve been able to do that, we picked up right where we left off,.  With His trusty, rusty old wheelbarrow.

4 thoughts on “Story of the week: Wheelbarrow”

Birds on grass today and free roaming. Sunshine and bugs make good eggs and meat.
You can take a southern boy out of country but the second he lands he goes back to his roots. Been a very long two days of flying. Almost back to my family.
Last set of villages for this overnight trip. The guys are teaching and we will show the films at dark. Pray for them and the people who will hear God's word this Sunday as you gather in your groups and churches.
I'm going to miss this simple life. Give some young girls some old fabric and endless game they play here. Last week here till I return to the capital then on to the U.S. #Tsumkwelife
Huge day! We have officially completed the story set for now. We have 28 stories that walk us from creation to the early church. We have 6 more stories in very very rough draft form but for now they will wait, we have run out of time to refine them. Now I will spend the next two weeks in the bush taking these stories to the people. Oh and also we finished translation and voiceover work on the "passion of Christ" movie which we will show in the villages too and the sermon on the mount movie also. Feels so good to have completed these 3 resources. Now to load up some solar audio players and let the Holy Spirit work in hearts. #Tsumkwelife
The past few weeks have seen me training these 4 translators how to record, then edit their audio. They are doing great. They can do it by themselves now. This week we hope to "put a bow" on 5 stories we've been working on since May. I have one more month here and alot to wrap up. We have 2 more stories to complete plus taking these stories out to the various villages. Jeremy